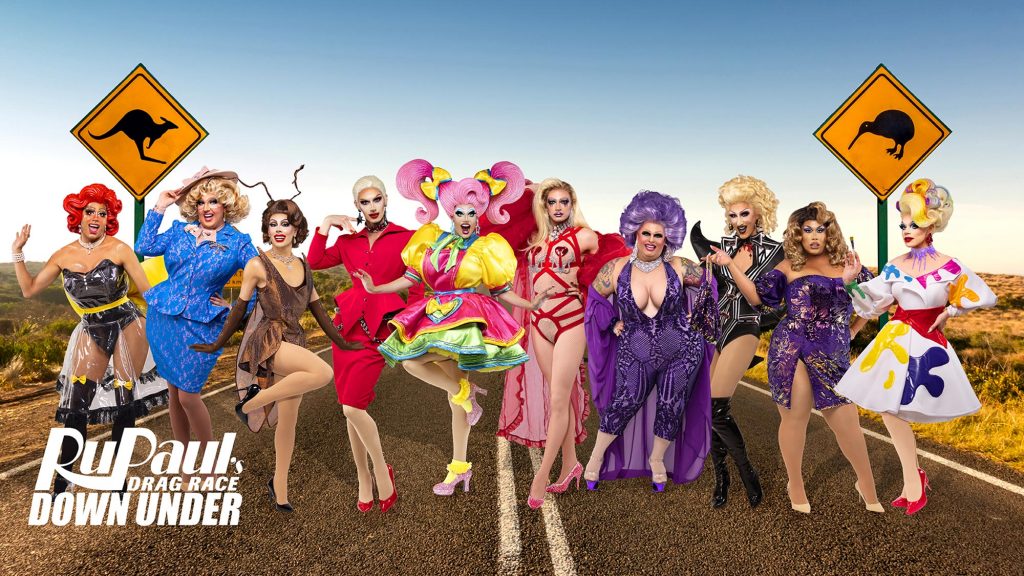 Downunder Judges Michelle Visage and Rhys Nicholson ran through to new cast members on the jumbrotons at the parade whilst a float of stan employees and dancers “the downunder pit crew” performed on the field.

Controversy has already dogged the production, with the New South Wales government being slammed for allowing the production to relocate to New Zealand from Sydney due to the covid 19 pandemic. At the time of filming, New Zealand was covid free, whilst return travellers from Sydney’s north shore, caused a limited community outbreak of covid by breaking rules of testing and isolation.

RuPaul, Michelle Visage, Rhys Nicholson and the production team including The WOW Report’s Fenton Bailey, and Tom Campbell (who are producers of the franchise globally) and the cast from both Australia AND New Zealand went into two weeks isolation prior to filming – which could have happened in Australia. But condragulations to NZ for securing the rights to film there!

The other slightly less controversial issue is that this season wasn’t an open casting call, promoted to all Queens across Australia and New Zealand. It seems that Ru’s influence in Australia and NZ and his love for his husband’s home country means the production had some instant in’s with the local scene already!

Back in 2012, Maxi Shield was the local host for Ru’s headline tour “GLAMAZON”, produced by Creative Cross and presented by non-other than Guidetogay and the Lifestyle channel. During the tour, Ru also appeared at the iconic Sydney Gay & Lesbian Mardi Gras party.

Local promoters, IN THE DARK have been touring Ru Girls for years, and iconic local queens, Maxi Shield and Karen from Finance have been the local hosts for many of the promoters gigs across the two countries.

Our sources tell us that although the cast was shortlisted, those limited queens that were in the know still had to audition. We cant wait to see those audition tapes!

Maxi and Minnie Cooper also made a special appearance at DRAGCON in Los Angeles for WIGS BY VANITY.

The first season of RuPaul’s Drag Race Downunder will air weekly 60 minute episodes on the following services later this year.

USA / Other: WOW Presents Plus

The cast for the first season are: