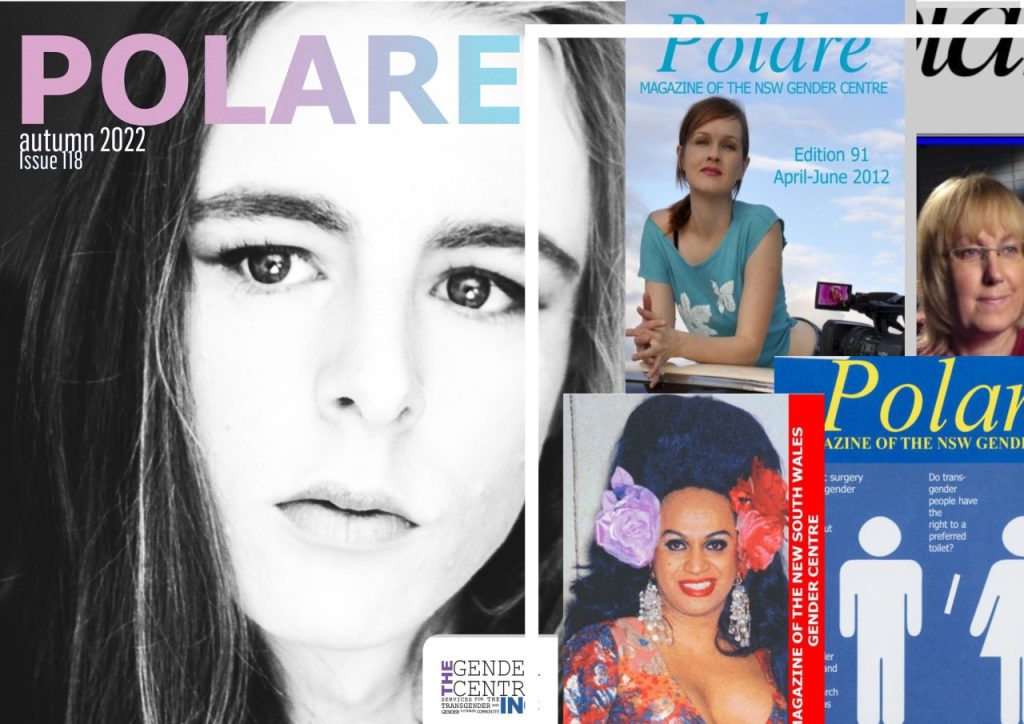 “Polare had been continuously in print from September 1993 until January 2019 and for decades we were the main resource for the trans and gender community in NSW,” says Eloise Brook from the Gender Centre.

“But it’s different in 2022. So much information and misinformation around the lives of trans and gender diverse (TGD) people and families bombards us from outside of the community. We felt it was time that we started talking about the important things that affect TGD people and families, the things that empower and connect us, and the things that unites us around our common, shared experiences. Relaunching Polare seemed like the perfect opportunity.”

Originally Polari was a 19th century London street-language. Fairground workers, sex workers and queer folk used Polari to communicate important information that under normal circumstances could be risky in the wrong places. “We loved the idea that our new Polare could do a similar thing,” says Brook. “Three times a year we’ll publish important stories that we think TGD people and families should be talking about. Whether that’s one of our community elders talking about how important it is to properly process regret; how our young people need extra time to grow into themselves or the way voice work can give us power over our transition, we’re publishing articles that are thought- provoking and liberating at the same time.

“But we also have our eyes set on bigger things. Originally Polare was NSW focused, but this year we are going to look wider to other states and territories for more national conversations. There is an important need for TGD people and families, TGD community focused organisations and TGD led specialist services to be talking about the things that effect our well-being.

“TGD people frequently dismiss the idea that we might be a community, or say that they aren’t interested in being identified as TGD. In 2022 I’m not sure how much of an option this is for TGD people and families. Political currents nationally and internationally seem to be against us. We are more in the spotlight than we have ever been and TGD rights remain a hot topic. Yet, we are still being talked about more than spoken too. It’s still a regular occurrence to have non-community allies and organisations to be asked to translate our stories and struggles on our behalf.  With Polare we want to change that.”

The Gender Centre is about to turn 40 and delivers over 90% of all Trans and gender diverse services in NSW. They are the front line; whether its crisis accommodation, families and young people, rural and remote support, or counselling and psychological services they remain the only trans-led, trans-specialist service in NSW.