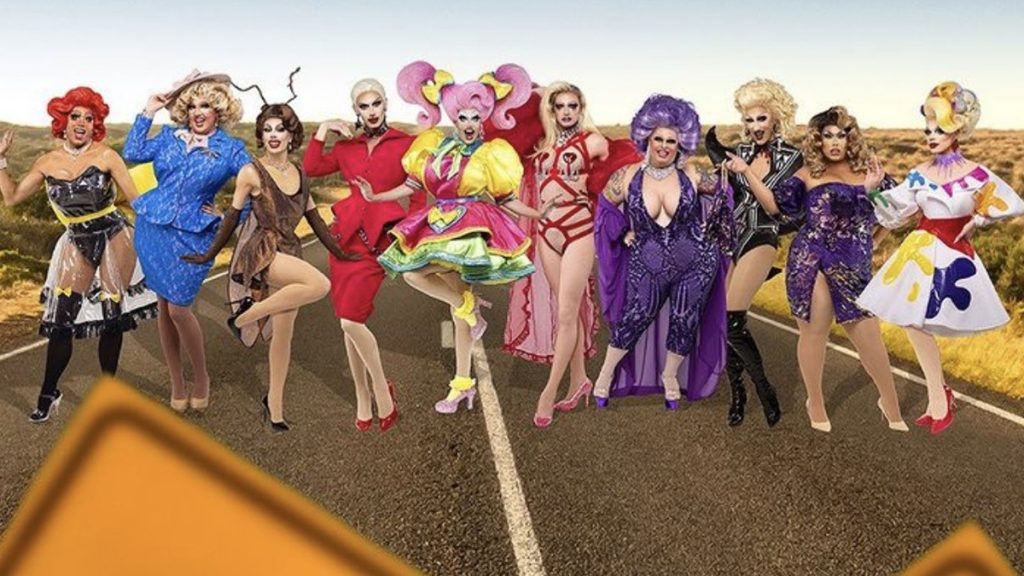 Of Season One fellow hunties.

Geez, so much negativity has been out there during this season!

Cue dramatic music and a pause, and after only eight episodes, New Zealand Drag icon, Kita Mean has been crowned winner of the first ever Drag Race Downunder.

WOW, what a season! With soooo much anticipation for a down-under season brewing after thirteen seasons of a US version, multiple all stars seasons and three international versions before us. It was a joy to hear the announcement that Ru and Michelle, who are self confessed Aussie-files were coming downunder to produce the first season of DRDU.

Given Australia had been for decades, prior to the Drag Race race phenomenon, the cornerstone of pop culture when it comes to drag. The pressure was on.

Add to the heightened expectations of what a stellar season this should be, place it smack bang in the middle of a pandemic, with restricted shooting schedules, short lead times for producers AND cast to actually plan out the series – you automatically have reduced resources.

Remember kittens, this isn’t the full WOW production team heading to NZ to film (even the location was a last-minute change) – this was a third party production company – who probably only had access to creative notes and time to watch a few seasons to kind guess the production flow and storytelling process that goes into all seasons.

With just a few WOW team leaders, like Tom, Fenton, and Raven being the minimal team from WOW making the journey…. It did not help but add to the “first season realness”. Not from a visual standpoint, but from a production / storytelling perspective.

It focussed more on the want for “drama” than allowing us to get to know the queens – and to top it off, there was no official “uncut” season where most of that happens. SO a lot of people got opportunities early on to stick in the knives and drag it DOWN rather than everybody say love.

I get it – it is HARD to get across ten contestants’ stories in only eight episodes. It certainly didn’t help that we were subjected to a mammoth 15 episode US season just weeks before the Aussie season debut… talk about putting us on the backfoot!

It also did not help that the social media landscape allowed uneducated and uninformed bloggers and reviewers to pass judgement to the teen audiences watching globally.

Really, unless you know the aussie references, don’t talk about them until you could have at LEAST googled them. Nearly all the ru-cap shows were so tragic in their reviews, as it showed that they were all amero-centric rather than actually giving a toss about what the queens were ACTUALLY DOING. A viewer’s lack of knowledge on iconic moments in pop culture or drag history should not be thrown at the production as their fault.

Kids, go educate yourself before sitting in front of a camera and commenting (just sayin’).

There were probably just two international rucappers that bothered to research before filming their responses, and that’s Wilma Fingerdoo (Canada) and Bussy Queen (USA). And locally, the best one – and the only real queer reviewer from oz or nz that had some clout or knew what they are doing was Trevor Ashley with their Drag Hag podcast.

The rest can really go and fuck spiders! LOL (BTW, I had never heard of this saying before drag race, so I googled it!)

It didn’t help that although Michelle Visage and RuPaul DO love Australia (for reals)… having a real love for something – does not make one an expert – and they should have taken time in pre-production to learn a bit more about the culture and the queens they were filming with. (just sayin’)

Aussie drag is a unique and groundbreaking force in global drag culture. We have it all – from the new school drag race baby drags, to comedy queens, to cabaret superstars and major TV icons. Our queens run the gamut from underground experimental to mainstream – the main thing in common with all the queens is the comradery, and the ability to throw shade and by C*nty without taking it personally. It’s true shade darlings, and with our hot Aussie sun, we KNOW about shade!

One thing that really got my knickers in a twist was the portrayal of Maxi Shield as an “old chook”, who BTW is not the oldest queen in Sydney by FAR. Sure she is an ICON, but hell, she is still a spring chicken when it comes to the variety of Drag Queens we have across AU/NZ.

The show itself spent far too much time focussing on staged storylines, rather than organically allowing the cast to show us themselves fully.

Its hard to get ten queens personalities out in only a few short episodes, that’s why it was a huge mistake not to produce the secondary “untucked” episode for this season.

The franchise definitely deserves a second season – but only if the producers are willing to back it like they do either franchises.

But remember kids, demographically, Australia and NZ are VERRRRRY small markets. Our viewership and therefore revenue streams are similar to say, that of CHICAGO. So you “could” give them a break for the amount of money that was spent on the production.

PHEW – ok so enough about production and negatives.

I personally loved this season – mainly cos I knew a lot of the queens – it was what, I gather straight men feel when watching the Super Bowl. I found myself crying, laughing and yelling at the TV like a deranged idiot. It was so much fun.

I grew up with Maxi, we were mates for years, I did her first-ever photoshoot on oxford st, I was there when she stood on the back of a ute for her first-ever show – so I am totally biased… she overcame every one of the things that I thought COULD send her home; but F*CK me, that line “I knew there would be a sewing challenge so I went and bloody got lessons” – is probably the best line of drag race in any franchise ever!

I fell for Elektra, with her hometown grit and determination. Aussies love an underdog (til they want to rip ’em down!) Jojo was fabulous and was the victim of the early cuts syndrome of the competition format. She is really a fabulous queen, so go show her some love on her social media and if you’re in town, check out her shows! Same with Etcetera Etcetera, she can really turn it out on stage. Scarlet I had never heard of, aside from her controversy, so I will just leave it at that.

Kita and Annita were camp as tits and well, I have a big soft spot for Kiwi Queens – Felicity Frockachino and Tess Tickle, Buck Wheat all have made impressions on me – I didn’t know of Kita and Anita Anita before now – but I am am glad i got to see some more fabulous NZ queens!

I first saw Coco Jumbo up in Coffs Harbour at the Coast Out Festival – she hasn’t changed – so sweet, funny and talented and can read you to filth with love! So proud.

Personally, I hadn’t known any of the Melbourne Queens personally – but have seen them do some amazing things online – so I felt proud (or guilty) by association!

Art had done work with WOW Presents before so I knew of her work and creativity, and wasn’t surprised she was brought back to the comp for that reason alone. I also had Karen from finance in our local sweepstakes, so I was betting on her to win! lol

I for one am proud that it managed to even get off the ground at ALL.

HUGE THANKS to Ru and Michelle for loving Australia and personally not giving up until this season happened.

Thanks to stan for airing seasons of drag race to prove the format would work here, Drag race is one of the reasons STAN is so successful in Australia – as it’s owned by two of the countries biggest media companies, the franchise had to be proven viable locally before this small step was even taken.

Thanks to the Aussie and NZ viewers who have sat through their fair share of shitty seasons of other countries’ versions, so we could get our own and showcase our gals to the world.

I for one will keep tuning in, and keep rooting for the local girls to have their fair place and fair share on the global stage that Drag Race provides.

Lets bring season 2 to the runway and put drag race dowunder on top!

And regardless, keep on supporting your local queens no matter where you are in the world.