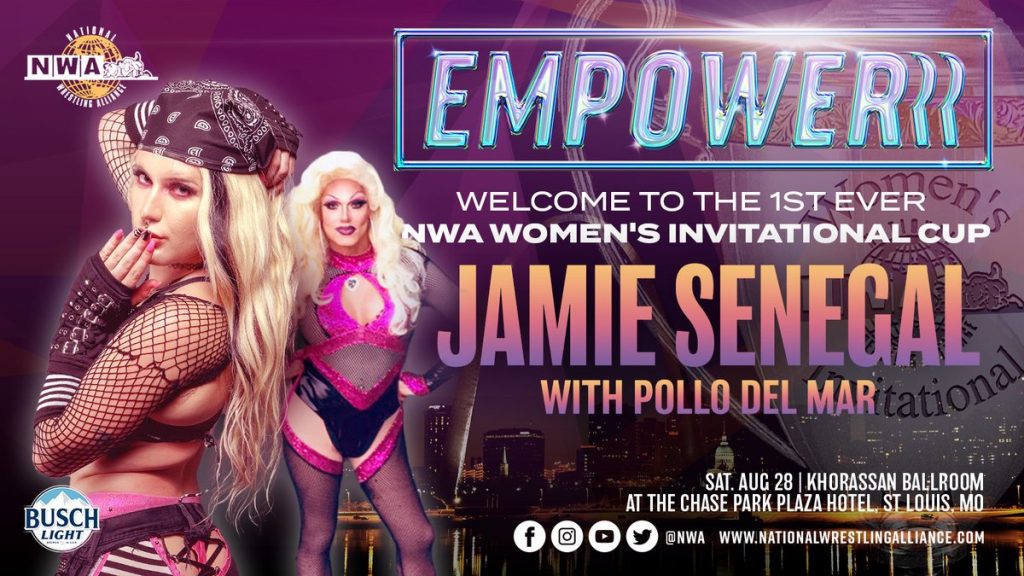 Originating from St. Louis as part of a four-day celebration of its anniversary, NWA EMPOWERRR is followed by the NWA 73 PPV and two days of television tapings. The first female-centric PPV in the company’s storied seven-decade history was envisioned by James to showcase women’s wrestling greats past, present and future.

Other huge names spanning the wrestling world, including multiple Hall of Famers, have been teased. James, however, is giving special emphasis to finding lesser-known talents — like Senegal — to share the spotlight.

“This show is about every woman. Everywhere. Who never got a chance [and] deserves a chance,”  the six-time World Wrestling Entertainment Women’s Champion said via Twitter.

Of Senegal, James said: “She is an incredible performer, and her story is so important to share. I think it could help and inspire so many.”

Hailing from Reading, PA, Senegal made her debut in 2015, competing against wrestling’s top names before publicly announcing her transition in June 2020. She now competes coast-to-coast, becoming a much-sought-after and recognized face in pro wrestling’s ever-evolving move toward LGBTQ+ representation and inclusion.

“Women’s wrestling is such a major part of my life,” Senegal gushed.

“It is the most EMPOWERRR-ing — pun intended — feeling,” she said of being recognized for her true identity. “I am so grateful Mickie and the NWA have given Pollo and me a platform to tell our stories and represent the communities we love and are so proudly part of.”

In the weeks leading to — and coming out of — EMPOWERRR, NWA will document the extravaganza on “Race to The Chase.” Named after St. Louis’ legendary Chase Ballroom, site of the event, the YouTube series delves into the personal, professional and emotional journeys of its competitors.

“Jamie is so talented and dynamic, both in the ring and out, and I am beyond excited for fans to see that,” said Paul E. Pratt, a cis-gender gay man who under drag persona Pollo Del Mar will accompany Senegal.

“For both of us, being part of the NWA and representing our respective parts of the LGBTQ+ community at this historic event,” Pratt concluded, “It is a dream come true.”