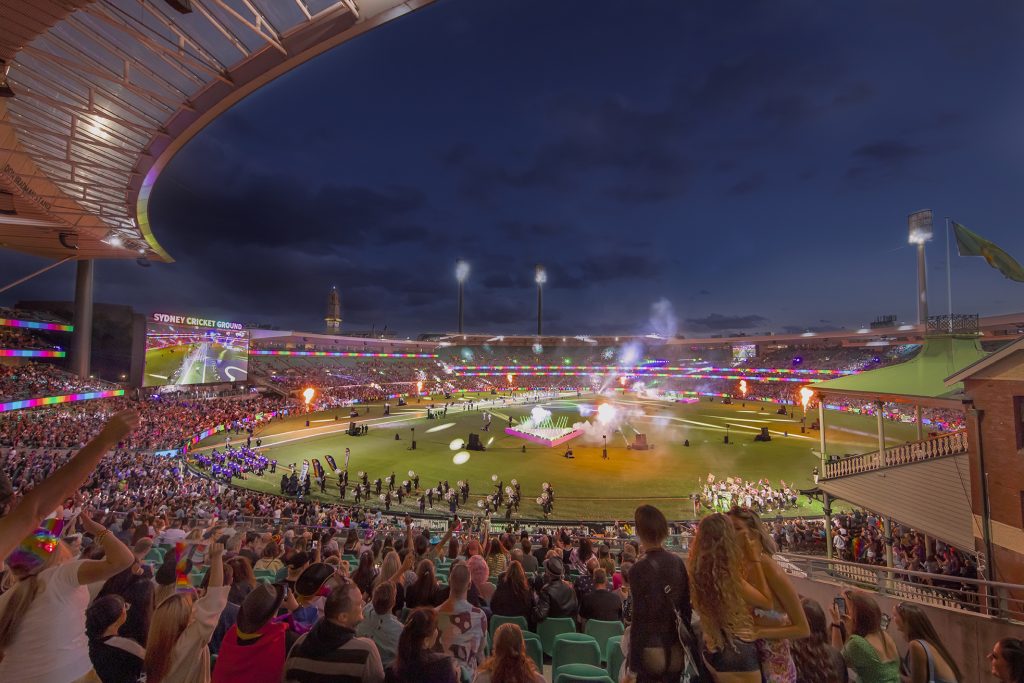 The Sydney Cricket Ground was awash in a vibrant display of pride and self-expression last night (Saturday 5 March) as the iconic Sydney Gay and Lesbian Mardi Gras Parade united LGBTQIA+ communities from all over Australia.

A stadium crowd of 40,000 spectators cheered on as 5,800 marchers, from over 160 parade entries, marched onto the field to show their pride, celebrate diversity and draw attention to LGBTQIA+ issues. Parade partner ABC broadcast the event live to homes and viewing parties across the country.

The theme for the 2022 Parade was UNITED WE SHINE, signifying that LGBTQIA+ communities shine brighter together and by standing up against hate and inequality as a collective, the message of love and inclusion is heard louder. This year’s Parade entries incorporated the theme into their final concepts that covered a range of important issues from trans rights and climate change, to celebrating uniqueness and community pride.

“If the last few months have shown us anything, it’s that there is still a long way to go before equality is achieved. Our trans kids are still under continued attack, there are LGBTQIA+ people in Ukraine fighting for their freedoms, there are still countries around the world where LGBTQIA+ people are being killed because they are different.”

“Visibility is a key stepping-stone to acceptance. That is why Mardi Gras is still so important. It gives us the opportunity to show the world how special diversity is, how wonderful equality could be, and it lets us show LGBTQIA+ people from all over the world that they are accepted and they are celebrated,” said Kruger.

This year marked the second year that the Parade was staged at the SCG due to the continued pandemic. However the unique setting offered another opportunity for Mardi Gras to stage an incredible stadium spectacular featuring a superstar line-up of performances from the likes of Darren Hayes, Vanessa Amorosi presented by Principal Partner American Express, The Wiggles, Mo’Ju, Wafia presented by TikTok, Timothy Springs, Prinnie Stevens, and local DJ’s KILIMI, Charlie Villas, Division 4.

“We returned to the SCG because when decisions had to be made last year there was still a lot of uncertainty around how safe having 250,000 spectators on the street would be,” said Kruger. “But we’re looking forward to returning to our spiritual home on Oxford Street next year.”

“2023 will be a very important year. We will host a truly global LGBTQIA+ pride festival when Sydney WorldPride comes to Australia, the very first time WorldPride has been held in the Southern Hemisphere.”

“Sydney WorldPride will feature 17 jam-packed days of events, draw in thousands of international tourists and introduce the world to our amazing First Nations and Asia Pacific LGBTQIA+ communities.”

“2023 will also mark Australia’s 50th anniversary of Gay Pride Week, the 45th anniversary of the first Mardi Gras Parade, and 5-year anniversary of Australian marriage equality. So we can promise that the celebrations we’re planning are going to be like nothing ever seen before,” said Kruger.