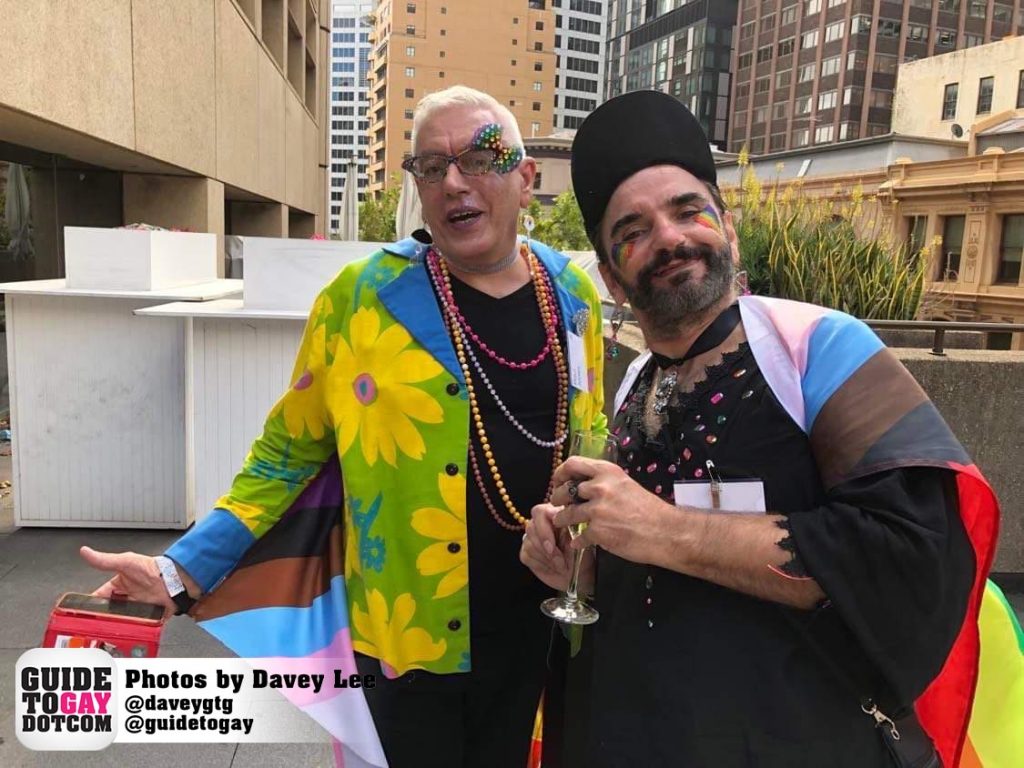 Scroll down for photos from the event.

The City of Sydney has unfurled a new flag at Sydney Town Hall to officially mark the start of the Mardi Gras season and celebrate LGBTQIA+ communities.

The Progress Pride flag will fly over Sydney’s most important civic building until the end of the festival on Sunday 6 March and permanently replace the rainbow flag at Taylor Square.

Created by non-binary artist and designer Daniel Quasar, the Progress Pride flag is a variation of the rainbow pride flag that incorporates additional colours to explicitly represent trans people and LGBTQIA+ communities of colour.

The flag will also feature on banners along George and William Streets in the city centre and King Street in Newtown, complemented with Progress Pride flag-coloured lighting on George Street between Alfred Street and Rawson Place.

For the first time, the Taylor Square fountain will also be illuminated with rainbow-coloured lighting until 16 March. The lights will loop through the water to create a rainbow waterfall effect.

Lord Mayor Clover Moore said the City of Sydney has been a proud supporter of the Sydney Gay and Lesbian Mardi Gras for 17 years.

“For more than 40 years, the rainbow flag has been the internationally recognised symbol of the LGBTQIA+ communities and we’ve flown the banners at every Mardi Gras since 2006, and at Sydney Town Hall since 2010,” the Lord Mayor said.

“This year, though, we’re making a change. For the first time, and in future, we will be flying the Progress Pride flag for Mardi Gras as the design represents greater inclusion, embracing the breadth of identity within the LGBTQIA+ communities.

“Sydney’s Gay and Lesbian Mardi Gras began as a protest in 1978 and has evolved into a powerful celebration of our diverse and resilient LGBTQIA+ communities.

“We have more LGBTQIA+ people in the City of Sydney than any other council in Australia and I am proud of our ongoing support and celebration of the festival. I wish everyone a safe and happy Mardi Gras.”

For the 17th consecutive year, City of Sydney staff will take part in the Mardi Gras parade. A ‘power in pride’ themed entry will feature 40 staff dressed as superheroes, wearing the Progress Pride flag as superhero capes, performing a choreographed routine to the Bonnie Tyler classic ‘Holding Out For A Hero’.

“Our theme this year of ‘power in pride’ is about remembering and recognising the contributions from our LGBTQIA+ communities, especially over the last 2 years,” the Lord Mayor said.

“Power in Pride is about owning who you are, celebrating your strengths and taking pride in your uniqueness.”

Under the theme of ‘United we shine’, this year’s Mardi Gras festival features a range of events including Queer Screen’s 29th Mardi Gras Film Festival, Oxtravaganza – a 2-week program of music, art and live performances, Fair Day at Victoria Park and the Mardi Gras parade.

For the second year, the parade will be a ticketed event at the Sydney Cricket Ground. The 44th parade will bring together 6,500 marchers and more than 160 floats, performances by special guests and a couple of surprises.

WorldPride celebrations are expected to attract around 1.2 million people and will help revive Sydney’s arts and culture scene and broader night-time economy.