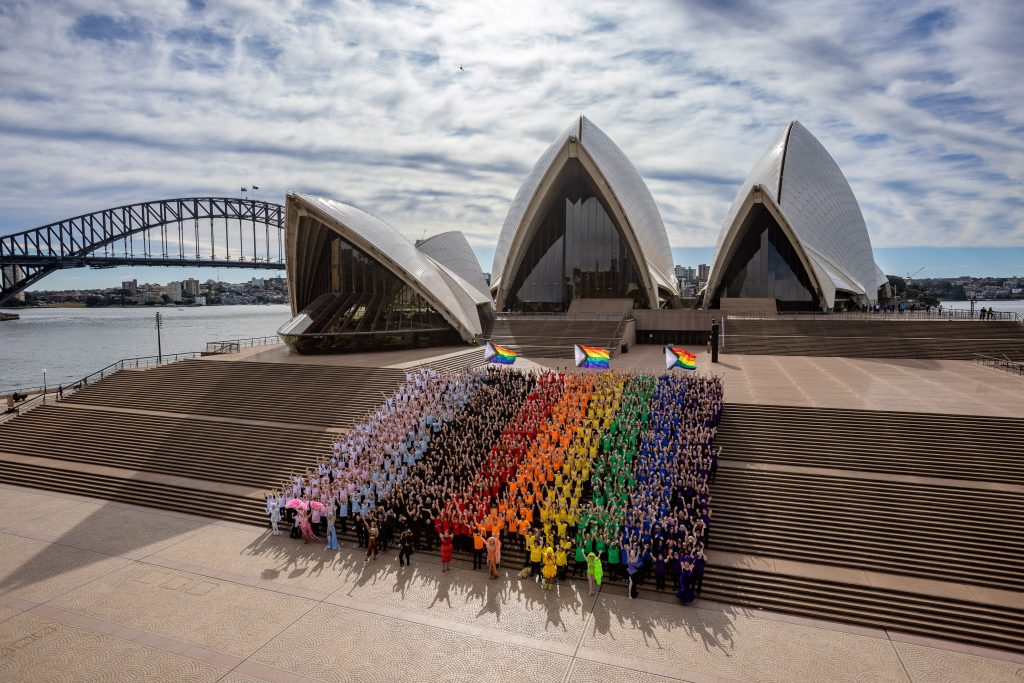 Nearly 1,000 Sydneysiders have created a giant human Progress Flag on the steps of the Sydney Opera House

The colourful display marks the 44th anniversary of the first Sydney Gay and Lesbian Mardi Gras and sends a message of welcome to the world as Sydney, Australia gears up to host WorldPride in 2023, with the hotly-anticipated tickets going on sale from 15 July. Locals and visitors alike can sign up to access early bird tickets.

Sydney’s famous Gay and Lesbian Mardi Gras is a must-do in the calendar of global Pride festivals – and Sydney WorldPride will be 17-day celebration of Australian LGBTQIA+ fabulousness, with over 300 events across the city.

Taking place from 17 February to 5 March 2023, Sydney WorldPride will celebrate Australia’s brilliant and diverse LGBTQIA+ community, in a city renowned for its diversity, inclusivity and proud LGBTQIA+ population.

More than 500,000 people are expected to participate in Sydney WorldPride and the festival will feature much-loved events including the world-famous Mardi Gras Parade, which will be returning to Oxford Street for the first time in three years.

In addition, there will be exciting one-off Sydney WorldPride major events:

·    Pride Villages – for 10 days from 24 February, sections of Crown Street and Riley Street will be closed and become home to stalls, dining and performances. On the final weekend of Sydney WorldPride, a section of Oxford Street itself will be closed to create a giant street party.

·    Bondi Beach Party, presented by Optus – for one day only, the sandy jewel of Sydney will become the city’s hottest club for 12,000 people.

·    Rainbow Republic, presented by Optus – six hours of live music, DJs and performances await you at The Domain, for a queer megamix of international and local acts.

·    Domain Dance Party – dance with 10,000 of your mates at the biggest LGBQTIA+ outdoor dance party Australia has ever seen.

·    Pride March – 50,000 people will join this historic Pride march across one of the world’s most-recognisable landmarks, the Sydney Harbour Bridge.

Local and international headliners for major events will be revealed later this year.

Sydney WorldPride Chief Operating Officer, Gabriel Pinkstone, said: “In just a few months, Sydney will be transformed as more than 500,000 people come together for the global family reunion LGBTQIA+ people have been waiting for.”

“Sydney WorldPride is a party with a purpose, and will celebrate Sydney’s most iconic locations, from Bondi Beach to the Sydney Opera House and the Harbour Bridge.”

“It’s the biggest summer event of 2023 and we can’t wait to welcome everyone back to celebrate Pride with Australia’s diverse LGBTQIA+ community.”

As well as Sydney WorldPride’s major events, there will be over 60 specially curated arts events and more than 20 sporting events as part of WorldPride Arts and WorldPride Sports. WorldPride Arts has been made possible thanks to Create NSW.

Minister for Enterprise, Investment and Trade, Minister for Tourism and Sport and Minister for Western Sydney, Stuart Ayres, said: “Sydney WorldPride 2023 will showcase our incredible and inclusive city to a global audience and will re-establish Sydney as a must-visit destination for visitors.”

“It’ll be the first time this event has been held in the Southern Hemisphere and has the potential to be the biggest event Sydney has seen since the Sydney 2000 Olympics.”

“As a city and a state, we are embracing the freedom we have earned through the hard times of the past two years.”

“The NSW Government continues to invest in world-class entertainment, hospitality and events; our goal is to be the events capital of the Asia-Pacific and supporting Sydney WorldPride 2023 helps achieve this.”

“NSW is ready to host this event and we are encouraging visitors to make the trip to enjoy the best that Sydney has to offer.”

Local artists, producers and party promoters are also being invited to take part in Pride Amplified, a dedicated open access program for arts, culture, experiences and parties, with hundreds of events expected to take place across Greater Sydney.

Clover Moore, the Lord Mayor of the City of Sydney, said: “The City is proud to be a fierce ally of the rainbow community and we are delighted to welcome the world to Sydney for Pride in 2023!”

“This is a fantastic moment for Sydney. Hosting WorldPride 2023 is an affirmation of our city as a richly diverse and accepting society, open to the world and inclusive of all, and a wonderful opportunity to help our arts, tourism and hospitality sectors that were so hard hit by the Covid pandemic.”

“This event will not only showcase the iconic surrounds of Sydney and NSW as a premier tourist destination, but it will also boost the profile of the Mardi Gras Festival to international audiences, creating a legacy that will have an important impact for the growth of Sydney Gay and Lesbian Mardi Gras and our community in years to come.”

Every year, Sydney Gay and Lesbian Mardi Gras is the hottest summer event in Sydney, with international headliners and visitors from around the globe joining one of the world’s most renowned Pride festivals.

Tickets go on sale to the general public at 09:00 AEST on 15 July via SydneyWorldPride.com.

To secure early access to Sydney WorldPride tickets, sign up now at sydneyworldpride.com to access pre-sale tickets from 09:00 AEST on 11 July. Mardi Gras Members not only get pre-sale access, but discounted tickets on many Mardi Gras events.

American Express Card Members will also have access to a selection of Sydney WorldPride pre-sale tickets from 9am AEST, Monday 11 July via the American Express website (T&Cs apply).

Sydney WorldPride is proud to offer $49 + booking fee tickets to select events for Aboriginal and Torres Strait Islander people through MobTix, and for select concession card holders through our Affordability Program.

Special thanks to Gildan Brands Australia for their generous donation of over 1,000 Gildan t-shirts worn by the participants in the Human Progress Flag.